This too, like the 1st to 3rd, was raised from the disbanded artillerymen of Sikh Army of Maharaja Ranjit Singh. The was raised at Haripur in 1851 and trained by Major Abbot to help the British Army defend the Hazara district of the North West Frontier. More details of this in my earlier posts.
5th MOUNTAIN :-
Raised in 1827 as Bombay Foot Artillery, the 5th is the oldest Indian Mountain Battery. Ironically, the battery was used by the British against the forces of Maharaja Ranjit Singh in the Second Sikh War at the siege of in 1849. The was the first to serve outside  when it took part in Abyssinia Expedition in 1867-68.

In the year 1896, the was back in and deployed in . In 1897 it came back to the Frontier and served in the Second Division of the Tirah Field Force. During the First World War, the 5th served on the Frontier, the Persian Seiten Cordon in 1917 and during the last mopping up operations in in 1917-1918.

Later, the saw action in the war against the Fakir of Ipi in in late 1930’s. It is worth pointing out, that unlike the 1st to 4th Mountain Batteries which were raised out of the disbanded Artillerymen of the Sikh Forces, the 5th never been part of Punjab Frontier Force. 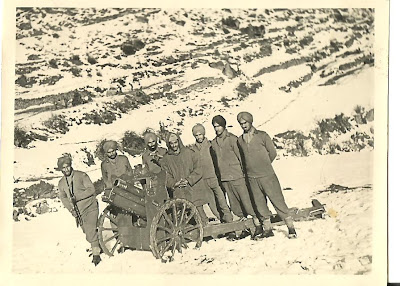 THE EVOLUTION OF MOUNTAIN GUNS:-
Before I conclude my article on the Indian Mountain Batteries, a few lines about the need of maintaining Mountain artillery & also the gradual developments of its guns, seem imperative to visualise their importance in battles.
The guns with the Mountain Batteries used to be light in calibre & designed in such a way that they could be dismantled into eight parts, carried on well trained mules to difficult mountain terrains, and deployed at designated gun positions after quick assembling.

The record time for dismantling or re-assembling a gun used to be between 45 to 50 seconds. The mules used to be known as “Mules MA” i.e. Mules Mountain Artillery, well built and much taller in comparison to "Mules GS" (General Service).


Each mule was designated to carry a particular part of the gun and accordingly, numbered as No1, 2, 3, & so on. The saddle for each mule was specially designed to enable the animal to trot, canter or gallop without dropping or damaging the load.
Like soldiers, the mules also had to under go vigorous training and therefore, their discipline and devotion to duty used to be unerring & beyond doubt; they were ready to serve, always and every where. The mules of each gun detachment would follow the lead mule (Mule No.1), maintaining their positions in sequence and once unloaded & the gun brought in action, they would remain completely still and silent. 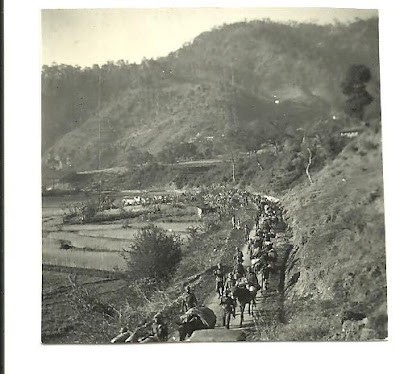 The earliest guns were the tiny 3 Pounder SBML (Smooth Bore Muzzle Loading) and 4.2/5 Inch SBML Howitzer of 1850 vintage. These were replaced in 1865 by the 7 Pounder RML (Rifle Muzzle Loading). In 1879, this too was replaced by the significantly improved and heavier 2.5 Inch RML – also known as Kipling’s Screw Gun. The advantage of this gun ( and all later versions) was that its barrel could be split in two for easier transportation.
During the Great War (First World War), all the Mountain Batteries were equipped with 10 Pounder BL or 2.75 Inch RML guns. It was only  in the last year of the war that the next model, the 3.7 Inch Howitzer, was introduced in proved to be far superior to the previous models. This continued as standard mountain gun during the inter-war years and throughout World War-II, and later on until 1965-66.
Below picture is of my OP (Observation Post) team at forward location. Me in the centre with my two TAs                      (Technical assistants) 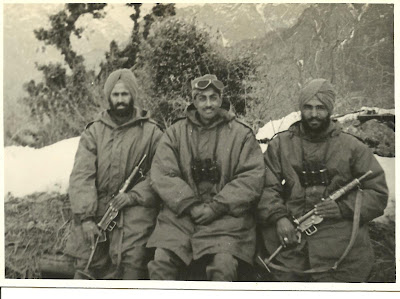