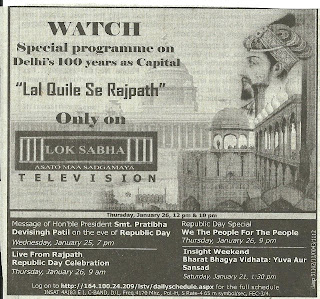 The above advertisement  which appeared in the HT  today, is about a special program on Delhi completing 100 years as Capital, to be shown on LOK SABHA Television on 26th of January on the eve of India's Republic Day. Interestingly the ad carries a picture of a person on its right top corner.This can not be of Manmohan Singh, our present Prime Minister. Or King George-Vth who had visited India 100 years ago and announced shifting of the capital from Calcutta (Now Kolkota) to New Delhi. Obviously this depicts picture of some Mughal King .
Was there no Delhi before Mughals invaded India ? Or this is just another cheap, subtle  election gimmick of the Congress led Govt. to vow the Muslim community  during the coming state elections ?
Any guess?
Posted by M.G. Singh at 10:29