1st(KOHAT) MOUNTAIN FRONTIER FORCE:-
This premier Indian mountain battery was raised at Bannu in 1851 from the Sikh artillerymen following the second Sikh War of 1849. The saw action in the Frontier area during the first war of   in 1847. (Sadly many Indian historians still call it Indian Mutiny) and in subsequent battles through out the 19th century.


During the Second Afghan War of 1878-80, it was deployed at Peiwar Kotal and saw heavy action at .
In the early stages of the First World War, the helped defend from Turkish aggression and soon thereafter, landed at Gallipoli where it supported the Australians and New Zealanders in the fighting and the subsequent pull out. Later the was sent to Mesopotamia & Persia till the war ended.
During the inter-war years, it was deployed in in early 1920’s and again in late 30’s. After ’s independence & partition of the country, the was transferred to


2nd (DERAJAT) MOUNTAIN FRONTIER FORCE:-
This , like the 1st kohat, was also raised from the disbanded Sikh artillerymen. However, it was raised two years earlier, in 1849 at Dera Ghazi Khan. During the 1857 Rebellion, its one detachment was deployed at and Bundelkhand
During the Second Afghan war of 1878-80, it remained deployed at Peirwar Kotal and Charasia to defend and then moved to the south of Kandhar, undertaking that most famous march. Later, in 1895, the took part in battles at Chitral and participated in operations of the Tirah Field Force.


During the First World War, in 1916,  the 2D (its nick-name) joined campaign against Colonel Von-Lettow-Vorbeck in  until the armistice.


Later on, the took part in the Third Afghan War in 1919, the Mohmand Campaigns of 1933 and 1935, and operations in Wazirstan against the Fakir of Ipi from 1936 on.
This was the  where I had the proud privilege to serve in early 1960’s. With the modernisation of the Indian Army and its guns; the 2-D is no more a Mountain Battery but has become a Field Battery. 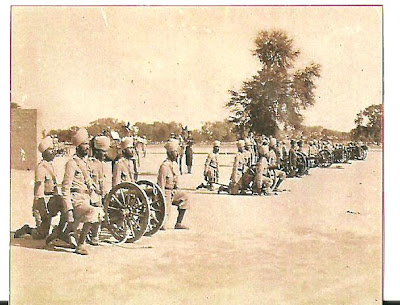 Before Second World War, the Mountain Batteries were equipped with various kinds of guns.The picture above shows a Mountain Battery in action with six of its 7 Pounder guns in ready position.
Posted by M.G. Singh at 10:49