Year 1961-62. I had joined the Indian Navy as a Naval Aviation Officer trainee in early 1961. It was the period when the country was tense and in a state of emergency as the stage was already set for an Indo-China show-down. The border clashes had started in various sectors all along the Northern borders and eventually culminated in a full fledged war.
The prestigious HMS Hercules of the British Navy had just been commissioned in the Indian Navy and re-designated (Indian Naval Ship) INS Vikrant. This was the first aircraft carrier had acquired and was thus, the pride of the whole nation in general and the Navy in particular.
It was also a proud moment for me as I joined the first batch of the Naval officers who were to be deputed to the INS Vikrant as pilots after training. Our batch consisted of 10 officers trainees and was nicknamed by officers of other branches as the CREAMY (Cream of the Navy).
This is the group picture of my batch, a rare and precious one. I am putting it on my blog with hopes of locating some one at least from this group. They are- sitting L to R;
Rathore, Sanan, Shetty, Sharma and Sabarwal. Standing L to R are Varma, Aron, Natrajan Bhati, self and Bansod. 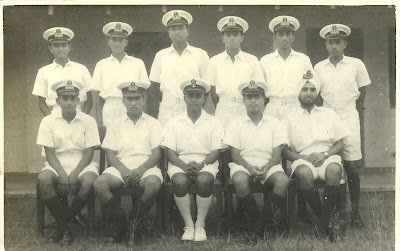