Today, I am going to tell you a story which has always been very close to my heart. The year was 1963-64 and the Indo-China war had just ended.  The Government of , at long last, had realised its folly of neglecting the defence forces since independence. So the process of correcting  past mistakes began on war footing, resulting in raising of new battalions and regiments, procurement of better and more modern fire arms, guns and other equipments etc. Many border areas where army had no earlier presence due to paucity of manpower quickly fell under the ambit of defence forces.
Keeping in line with this, a new Army Division was also raised to cover the Central Sector and units were soon ordered to move to the assigned operational areas under the newly formed brigades.  My Battery, the 2nd (Derajat) Mountain Battery Frontier Force,  which had returned to a peace station just a few months ago after taking part in the 1962 Indo-China war in NEFA area, was ordered to move to join the new mountain brigade at a place called Joshimath.
As the first artillery unit to move to that sector, we were put on a special train, lock stock & barrel, with all our horses, mules, guns etc., reaching Rishikesh the next day, at the Himalayan foothills. There, the rapidly organised itself for a long march up the mountain. Guns were dismantled and loaded on respective mules as were other equipments.  Officers and men carried their own weapons and belongings in backpacks.  It was a long march of about 270 kilometres up the mountain which we covered in a record time of 12 days.
The march used to be mostly undertaken during the early morning hours between , thus avoiding any traffic or people. Fortunately, there was also no sickness or injuries to any men or animal and the reached Joshimath 100% fit.
Picture below shows cleaning & massaging of animals: This was carried out daily after completion of  a march. The animals are also checked for any injuries, checking of hooves,  shoeing, etc if needed 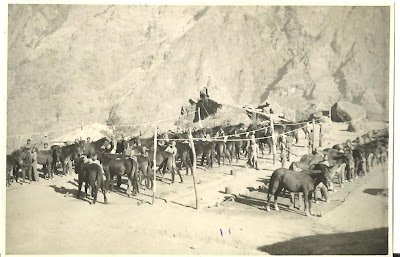 At the assigned area allotted to us, the guns were quickly deployed and process of settlement commenced. Simultaneously, reconnaissance (recce) up to various passes at the border to select suitable gun positions and Observation Posts (OPs) was also undertaken regularly.
The battery had just three officers: all captains with just six months difference in their seniority. Thus, the senior most amongst us held the charge of the officiating Commander, the second one as OP officer, while I, being the junior most, served as the Gun Position Officer (GPO).
Within a month or so of our arrival, winter set in with occasional but heavy snowfall.  It was then decided that a final long range recce be carried out before the area became inaccessible for winter as well as to construct an underground shelter at the forward most location of the OP to cover any eventuality.
I, along with a team of 12 gunners with 4 mules, undertook the exercise and was able to recce the area up to the border.  We were able to construct a temporary shelter for the forward most OP. After completing  tasks in 7 days, we started our return journey on the eighth morning, and by evening had reached below the snowline. We decided to camp for the night under a huge projecting rock. 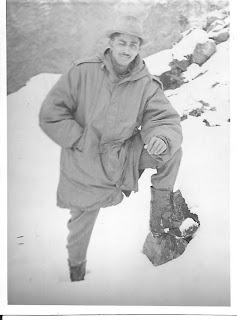 Picture below is of Local villagers en-route 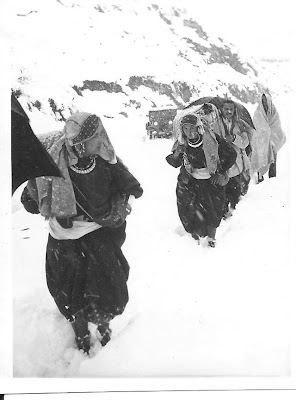 Some of the members of the recce team 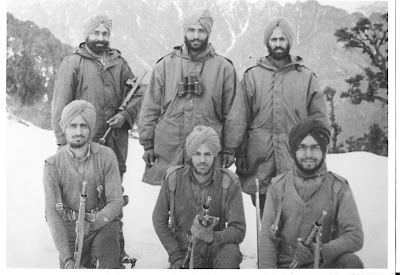 It was then that we heard some sound of an animal behind the rock. Cautiously, we approached the site with loaded rifles and found something quite unbelievable. There was a young bear cub sitting next to its mother and crying. The mother was dead, probably killed a few days ago. We could not determine the reason.

I slowly approached the cub, talking softly. To my utter surprise, I found him not aggressive at all.  In the meanwhile, one of our men had opened a small can of Milk Maid sweet condensed milk, poured a small amount on a leaf, and put it near the cub. The cub quickly licked up the milk.  We now knew the cub was hungry, so the process was repeated and soon it became a source of entertainment.
After another 2 days of descent, we reached the road head, and on the third day, to our unit, with the cub carried along on our shoulders all the way.
Every one in the was thrilled to find one more addition to the pets in the unit.  The was already in possession of 6 horses, 80 mules, both provided by the government, one ram, (the Mascot), my one personal tomcat and two local dogs. The bear cub accordingly, was attached to the officers’ mess where it started living in my room. My batman, who had been looking after my tomcat and the three dogs (and me) was very enthusiastic. He quickly got a small bed made by the unit carpenter from empty wooden rum cartons and a blanket issued from the Quarter Master’s store for the cub.
The cub, in turn, grew friendly with everyone and an instant hit amongst animals of the unit. Gradually I started teaching him some tricks as well and officers of other near by units started visiting us to watch the fun.  Some mischievous colleagues even started serving him rum which the cub enjoyed immensely. Sitting on the table with us at the lunch and dinner for his meal along with us became a routine for the cub, one we all enjoyed.
The , being far way from the Regimental Headquarters, had no immediate supervision of any senior officer and was thus practically independent. The three of us, all young captains, were in-charge of running the and everyone had their own bright ideas of improving the efficiency of the unit.
The red tape and over-emphasis on discipline was cut out. Leave was granted to the troops to be more liberal.  Being the only artillery unit in the brigade, we also became favourites of the Brigade Commander and other senior officers there.
By the end of the year, when Brigade celebrated its raising day, our won the Inter-Unit championship trophies in hockey and basketball.  It also came first in fancy dress competition and variety entertainment programmes. Every one was happy and many of us did not even feel the necessity to avail our annual leave to go home.

The news of our popularity soon reached our Regimental Headquarters which was still located at the peace station at . That is when the catastrophe struck.
A Bhangra dance presentation by the Battery during the Brigade Raising day function 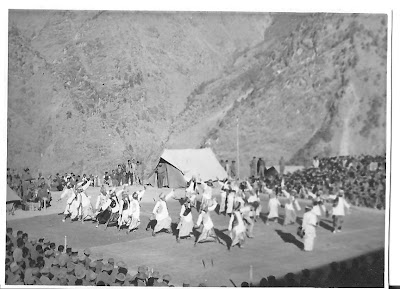 Picture below of the Fancy Dress team. The Battery Ram (mascot) is third from right and one of my dogs is on front left. The two persons dressed in ladies' Shalwar/ Kameez are  men 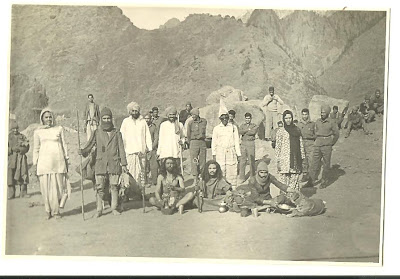 Picture below is of the two teams preparing for pillow fight on mules: a competition between two sections of the Battery which was a source of good entertainment 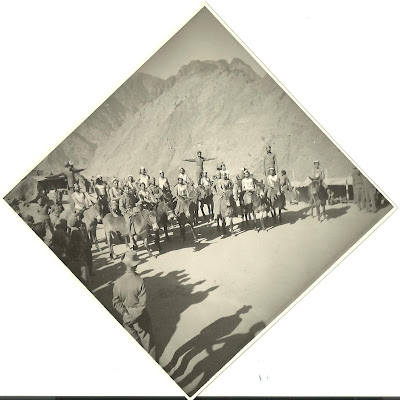 A signal arrived from the Headquarters announcing a visit of our Commanding Officer (CO) for a thorough inspection of the .  The preparations for his visit began: a detailed programme for his two-day stay at the station was drawn up, ensuring that he spent most of his time meeting and dining with other senior officers of the brigade and as little time as possible with the . A dinner, however, was fixed in our mess on the last day where, Brigade Commander and other Commanding Officers of the Battalions, were invited.

The Officers’ Mess was accordingly cleaned and done up. More knowledgeable cooks from other Officers’ messes were requisitioned. Additional crockery, cutlery, linen etc. were begged and borrowed. A brass band of the nearby Kumaon battalion was requisitioned. Our horses, and few mules with riders in ceremonial dress complete with unit flags and lances, were lined up all along the route from the entrance of the to the Officers’ Mess with tall torches pitched at regular intervals.

Self with my dog -a Bhotia mountain breed. Its huge is size,love snow and high altitude A wonderful companion & watch dog 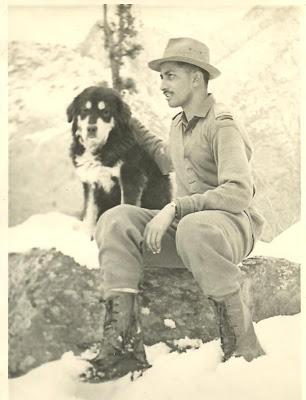 The batmen for us three officers had been instructed to take away the tomcat and the three dogs to the unit line and hide them along with the horses/mules. The bear cub, who preferred the company of officers, was also fed early and put to bed and the room bolted from outside.  The dinner went very well and every one thanked us for making such a wonderful arrangements.

My other two dogs: out side my temporary tin shed accommodation 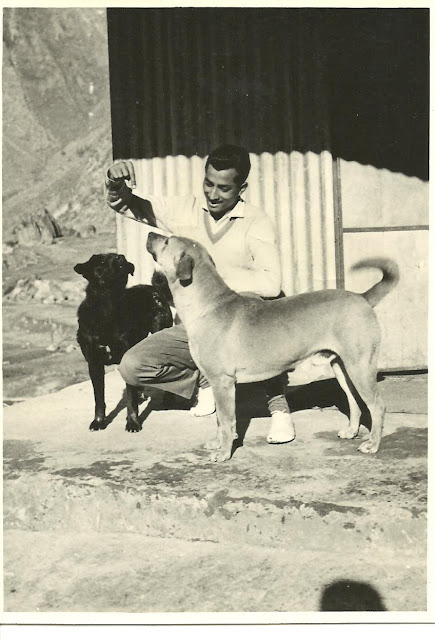 Our CO too, seemed happy and winked at us, probably saying “Well Done Boys”. Finally, around 2230 hours everyone had left and we three sigh a sense of relief. The visit had been a success and we were on cloud nine.  As is customary on such occasions, few crates of rum bottles were brought out from the Mess store and handed over to the Band Master, the cooks, horse holders, waiters etc. as reward for their great performance.

It was then that my batman came running in to announce the disaster created by the bear cub. We all ran around to my room and found the cub sitting in a corner and crying profusely.
He has torn all my clothes, the sleeping bag, pillows and all books and papers. Since all the three of us were occupying one temporary shed and only had temporary partitions between our rooms, the cub had also jumped over to the other rooms and damaged belongings of the other two officers as well.
Our first reaction was to kick the cub out. But then good sense prevailed. We tried to pacify him by petting and talking but all in vain. A peg of rum with some left over food from the party was too brought, but he refused it.  Finally, after much coaxing, he was brought to the dining table, made to sit on his usual chair while we sat down. Then he ate, finished his drink, and became normal.
Soon we realised that he was growing up fast and it was increasingly difficult to cope with his tantrums. Accordingly the nearest Zoo, which was in , was contacted and the cub eventually handed over to them.
It was a sad parting for all of us but we had no other alternative. We all cherished the sweet memories of those days though, and made a point to go see him as and when anyone from the unit happened to pass through .
Note: It is unfortunate that the picture of the bear cub, the main hero of the story, has been misplaced/lost.